The Stand-Your-Ground Laws in Florida

On Thursday, November 7, 2013, the Florida House Criminal Justice Subcommittee conducted a five hour hearing on House Bill 4003, which is legislation to repeal Florida's self-defense immunity statute (commonly known as the Stand-Your-Ground law).  The measure was soundly defeated by a vote of 11 to 2.

The hearing occurred after the 30 plus day protect against the Stand Your Law ground by the Dream Defenders. The Dream Defenders are a group of activist who camped out at the Florida State Capital promising not to leave until Governor Rick Scott held a special session to talk about repealing Florida's Stand-Your-Ground statute.

Florida's self-defense immunity statute passed unanimously in the Florida Senate in 2005 with overwhelming and bipartisan support in the Florida House. In fact, the legislation passed 94 to 20.

What Protections are Contained in Florida's Stand Your Ground Laws?

Among other protections, Florida's self-defense immunity statute allows the defense to file a pretrial motion to dismiss the charges. The statute also provides for special jury instructions if immunity from prosecution is not granted on a pre-trial basis.

Filing the pre-trial motion triggers a evidentiary hearing during which the trial court must either grant or deny the pretrial motion to dismiss after hearing testimony and reviewing evidence in the case.

If the court denies the motion, the defense can appeal the decision to deny a “Stand Your Ground” motion before trial and the refusal to invoke self-defense immunity by filing a petition for writ of prohibition.

At the motion the defense will argue that the defendant was justified in his actions. A person is justified in using deadly force when he or she reasonably believes such force is necessary to prevent imminent death or great bodily harm to him or herself or another, or to prevent the imminent commission of a forcible felony. § 776.012, Fla. Stat. (2011) such as false imprisonment.

False imprisonment, for example, is defined as “forcibly, by threat, or secretly confining, abducting, imprisoning, or restraining another person without lawful authority and against her or his will.” § 787.02(1)(a), Fla. Stat. (2011).

If the trial court finds that the other side's actions rise to the level of a forcible felony such as false imprisonment, aggravated assault, or another type of forcible felony, then the Defendant might be justified in his use of force on this basis. The trial court will consider whether there was an imminent threat and whether the Defendant's subjective fear was objectively unreasonable. 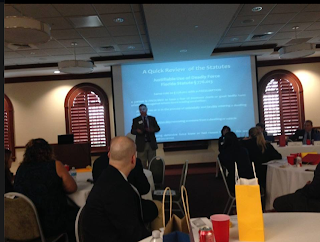 Today I attended a Judicial CLE Luncheon presented by the Hillsborough County Bar Association with the Criminal Felony Bench.


The title of the event was "Motions: How to Present, Persuade and Defend in Motion Practice." The luncheon was held at the Chester H. Ferguson Law Center in Tampa, FL.

These Judicial CLE Luncheons really give the criminal defense bar a wonderful chance to see the judges in a more relaxed setting. The seminars give us a unique glimpse into how the different judges make decisions in different types of pre-trial motion hearings.

It has been said that good lawyers know the law and great lawyers know the judge. Attending a seminar like this really drives that point home. Almost all of the judges on the criminal bench in Circuit Court in Hillsborough County participated including:

Topics for the discussion included:

The Hillsborough County Bar Association works hard to put together these Judicial CLE Luncheons. The criminal defense attorneys and prosecutors here are lucky that the judges participate in these quality CLE seminars. Hopefully, the HCBA will have a few more of these throughout the year.
Posted by Leslie Sammis No comments:

The website for Simply Hope, Inc., promises a transitional housing program serving adults recovering from substance abuse. Through grant money, the company was able to expand into Pasco County in 2010.

It was awarded a 300 Club Grant through the court system which provides more than $35,000 a year from 2010-2013. It became qualified housing for the Jail Diversion Program and received additional support through the Pinellas County Public Defenders Office, members of the Pinellas Ex-Offender Reentry Coalition and co-chairs of the Coalition Housing Committee.

For the CEO of Simply Hope, Ray Harris, the program also granted him an opportunity to exert his influence over vulnerable young women caught up in the Pinellas County Drug Court Program. Over the years, hundreds of these women were required to live at the Simply Hope transitional houses. Ray Harris has a checkered past. He is a former drug addict with felony convictions, including a crime of dishonesty for grand theft.

One of the biggest supports of the Ray Harris and his company, Simply Hope, Inc., was Judge Dee Anna Farnell. In her courtroom, the progress reports from Ray Harris carried great weight. His allegations would send a women to prison for a long time. Anyone who dared to contradict his allegations faced the consequences.

Now dozens of these women have come forward to alleged sexual abuse they suffered at the hands of Ray Harris dating back to 2007.  Those women might risk a hefty prison sentence for complaining except for the fact that one woman was able to record the misconduct on her cell phone.

In the recording you can clearly hear Ray Harris kissing her. She avoids further sexual contact by telling him that she doesn't feel well and asks for a pass. The recording suggests that Ray Harris knows he can get what he wants with women he supervises in the program.

The media has found at least one instances showing a woman in the program reported the abuse to their probation officer, even as early as 2010. For years, nothing was done. The recording on the cell phone leaves little doubt about Ray Harris' intentions.

The local media is reporting that so far, Judge Farnell is not commenting on the allegations. Although no more referrals are being made to Simply Hope, Inc., the court has been slow to act. Drug Court participants are still in the program. After the phone recording surfaced, the Public Defender's Office didn't hesitate to pull female clients it represents out of the program.

Other members of the board of directors include Tommy Gillis, a rehabilitated ex-offender, and Tonya Cardinali, the marketing manager.

The Pinellas County Sheriff's Office has opened an investigation into two of the complaints. It forwarded its findings to the State Attorney's Office in Pinellas County to determine whether charges should be filed against Ray Harris.

Read more about the problems at the Simply Hope Halfway House in Pinellas Park, FL.
Posted by Leslie Sammis 1 comment: