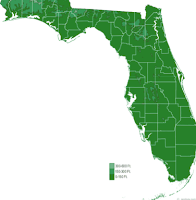 The United for Care campaign, run by the People United for Medical Marijuana (PUFMM), just announced that it plans to file a petition next week with the Florida Secretary of State.  I'll post a copy of the petition as soon as it is available next week.

Florida's Medical Marijuana Constitutional Amendment Expected to be on 2014 Ballot

The petition is the first step towards amending the Florida Constitution to provide for the legalization of marijuana for medical purposes. PUFMM will need approximately 700,000 signatures during a petition drive in order for the issue to be included on the general election ballot in 2014.

Wording of the Petition was Drafted by Expert Jon Mills

The legislation was drafted by Florida constitutional expert Jon Mills, a former Florida House Speaker and the past dean of the University of Florida College of Law. Jon Mills has been working on the wording of the petition for months.

Statewide polling from earlier this year showed that seventy percent (70%) of Florida voters supported a constitutional amendment to legalize medical marijuana. Nineteen states have already enacted medical marijuana laws that vary widely. In order for the ballot initiative to become law, it must receive 60% of the vote as opposed to a simple majority.

We can expect fierce opposition to any efforts to legalize medical marijuana in Florida. The most common argument against legalization is that cannabis serves as an entry point for the use of other illegal drugs in a theory called the "gateway effect."

Floridians that want to legalize medical marijuana are in for a long and difficult battle. Then Manatee County Substance Abuse Coalition recently posted an article opposing medical marijuana on its website. The article is from the Florida Alcohol and Drug Abuse Association (FADAA) which published a "Medical Marijuana White Paper" dated April of 2012. According to the article:


"States that have established medical marijuana programs have experienced widespread program abuse. In states that track conditions under which people qualify to use medical marijuana, on average, only 7 percent of patients have terminal or life-threatening illnesses. The vast majority are smoking marijuana for pain (a subjective term that is being used to cover medical conditions such as menstrual cramps, headaches and minor arthritis). The idea of treating pain with smoked marijuana is of particular concern for Florida, as we are experiencing an epidemic of prescription drug abuse."

Raising Money for the Legalization of Medical Cannabis in Florida

The new directory of PUFMM, personal injury attorney John Morgan said he plans to help raise between 2 to 3 million dollars for the petition drive. To run a successful campaign, he estimates it will take more than than 20 million dollars.

If you support or oppose the idea of a constitutional amendment to the Florida Constitution to legalize cannabis for medical purposes in 2014, then leave a comment. Get involved by raising money for the petition drive or volunteering your time.
Posted by Leslie Sammis No comments:

The Committee on Standard Jury Instructions in Criminal Cases is currently reviewing the following jury instructions because of recent legislation or case law:

Posted by Leslie Sammis No comments: 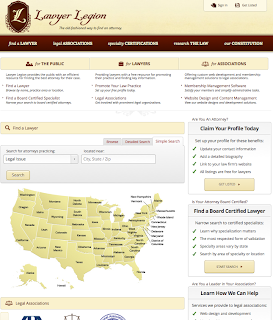 Check out a new kind of online attorney directory called "Lawyer Legion." The website, www.lawyerlegion.com, just launched on March 22, 2013. All of the listings are completely free. In fact, no paid listings are allowed.

Lawyer Legion is a project of Internet LAVA, LLC, in Houston, TX. By way of disclaimer, my brother (who is 10 years younger than me) is the president of the company. I also own part of the company.

Lawyer Legion created an easy way to feed over the members profiles into the organization's own "Find a Lawyer" feature on its website.

Lawyer Legion has already partnered with several legal organizations. In fact, they just launched the membership directory for the NORML Legal Committee (NLC) which is comprised of more than 600 attorneys that support the legalization of marijuana.

Lawyer Legion also just launched a redesigned website for the Palm Beach County Hispanic Bar Association. It also features this type of membership directory that lets the public begin their search for an attorney out of the organization's pool of members. 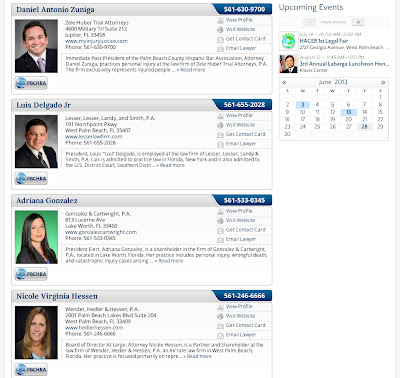 More of these sites are coming soon. If your voluntary or specialty bar association or other type of non-profit legal organization needs a membership directory or even a redesigned website, then contact Lawyer Legion for more information. Send them an e-mail at support@lawyerlegion.com.

The Only Nationwide Directory for Board Certified Attorneys

The directory also features badges for membership or leadership within other types of legal organizations. It is still a work in progress, but click here to see how it works for finding criminal defense attorneys in Florida. This is another example for criminal defense lawyers in San Francisco, CA.

Claim and Complete Your Free Listing on Lawyer Legion

The directory already has profiles for more than 100,000 attorneys. Especially if you are an attorney focused on criminal defense DUI, family law, personal injury, bankruptcy and immigration, chances are your profile is already in the Lawyer Legion directory. Claim and complete your profile and let us know what you think.
Posted by Leslie Sammis No comments: