Read the Petition for Medical Marijuana in Florida by Constitutional Amendment

Petition for Medical Marijuana in Florida


United for Care, the sponsor of the initiative, has until February 1, 2014 to gather approximately 700,000 valid signatures. The Florida Secretary of State gave final approval yesterday for signature gathering to begin. If the required signatures are collected, then the measure will appear on the general election ballot in November of 2014. Because the initiative is for a constitutional amendment, it must pass by 60% before it becomes law. 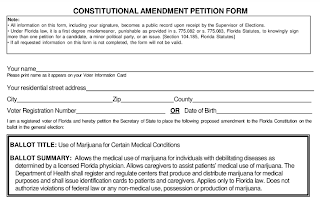 Use of Marijuana for Certain Medical Conditions

The title of the ballow is "Use of Marijuana for Certain Medical Conditions."

The summary of the ballot initiative reads:


Allows the medical use of marijuana for individuals with debilitating diseases as determined by a licensed Florida physician. Allows caregivers to assist patients' medical use of marijuana. The Department of Health shall register and regulate centers that produce and distribute marijuana for medical purposes and shall issue identification cards to patients and caregivers. Applies only to Florida law. Does not authorize violations of federal law or any non-medical use, possession or production of marijuana.

If it becomes law, the new constitutional amendment would be Article X, Section 29 which protects the production, possession and use of medical marijuana.

The public policy section of the initiative provides that "[t]he medical use of marijuana by a qualifying patient or personal caregiver is not subject to criminal or civil liability or sanctions under Florida law except as provided in this section."

Protection for Physicians who issue a "Physician Certificate"

It provides that a physician licensed in Florida "shall not be subject to criminal or civil liability or sanctions under Florida law for issuing a physician certification to a person diagnosed with a debilitating medical condition in a manner consistent with this section."

The medical marijuana initiative defines the term "Debilitating Medical Condition" to include any condition for which a physician believes the "medical use of marijuana would likely outweigh the potential health risks for a patient" specifically including but not limited to the following
The term "Identification card" is defined to means a document issued by the Florida Department of Health or its successor agency that "identifies a person who has a physician certification or a personal caregiver who is at least twenty-one (21) years old and has agreed to assist with a qualifying patient's medical use marijuana."

The term "Marijuana" is defined to have the same meaning given cannabis under Florida Section 893.02(3), Florida Statutes (2013).

The Definition of a "Medical Marijuana Treatment Center"

The proposed constitutional amendment defines the Florida "Medical Marijuana Treatment Center" as an entity registered by the Florida Department of Health or its successor agency that can cultivate and sell marijuana, produce containing marijuana, related supplies and educational materials to patients and their caregivers.

So what do you think of the language?

Leave a comment if you have an opinion on the language in the proposed constitutional amendment.
Posted by Leslie Sammis