Detectives with the Hillsborough County Sheriff’s Office (HCSO) wrapped up the first phase of an investigation of Tampa Bay pain clinics. The three-month undercover investigation in the Tampa Bay area was dubbed "Operation Pain Reliever." The first phase of the investigation resulted in more than 85 men and women being arrested and charged with felony offenses that included doctor shopping, conspiracy to traffic in prescription medications and trafficking in a controlled substance over 28 grams.

During the investigation, undercover officers entered pain clinics posing as patients in order to gather evidence of buying pills, doctor shopping, and presenting fake or forged prescriptions. The detectives also recruited confidential informants who were working as employees in the pain clinics in an attempt to gather additional evidence. The detectives also used current and former patients as confidential informants to gather evidence against area doctors.

Those men and women who were recently arrested will be interrogated in order to gather information about the doctors that run the various pain clinics throughout the Tampa Bay area. Several doctors have been arrested for running pain clinics in Florida after law enforcement officers converged on their homes and businesses and raided business records, froze bank accounts, and seized vehicles and other valuables labeled as evidence of criminal wrongdoing. In some instances, the law enforcement agencies attempted asset forfeiture actions against the seized property.

Law enforcement officers predict more arrests of health care professionals during the coming months as evidence is gathered against the pain clinics, often called "pill mills" by law enforcement officers. Possible criminal charges include racketeering, trafficking in a controlled substance over 28 grams and conspiracy to traffic a controlled substance, operating a Tampa pain clinic without a license, 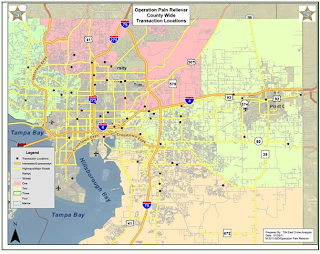