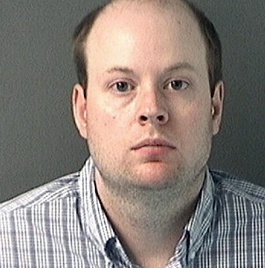 An FDLE crime lab employee that resigned on Monday for stealing pain pills.
According to the Florida Department of Law Enforcement, this chemist is a crime lab technician who is accused of stealing prescription drugs and replacing them with over the counter pills to cover up the theft.

This FDLE crime lab chemist got caught tampering with evidence which calls into question every lab report he has authored since 2006 when he was originally hired by FDLE.
The allegation that he was replacing the missing pills with over the counter pills suggests that this was not the first time he did it. An employee of FDLE willing to steal drugs from evidence could quickly make millions by selling the drugs on the black market. The fact that one employee could be accused of such a thing makes us wonder whether such thefts are widespread.
FDLE estimates that 2,600 cases in 35 counties might be impacted. These lab reports are the basis for sending people to prison often for long drug trafficking charges and often with minimum mandatory sentences that must be served day for day.
The penalties in these cases hinge on identifying the substance and its weight. So if the chemist is tampering with evidence - all of those convictions are in doubt. It certainly impacts any pending case involving this chemist. But it might even impact past cases for people sitting now in prison who might have newly discovered evidence sufficient to reopen the case based on these allegations against the former FDLE crime lab chemist.
It also shows a more basic problem with the way FDLE is running its crime labs. The chain of custody in these cases is very important. When you have one instance of tampering with evidence it points to the fact that other FDLE employees could be doing the same thing.
Criminal defense attorneys should be the first to discover crooked lab technicians who are willing to write a report and lie under oath. These lab reports should never be trusted. It is important to actually go to the evidence room and look at the evidence to make sure it is what the report says it is.
Attorneys should take the deposition of the crime lab technicians so they can explain their reports when appropriate. It also means that attorneys will be making more demands for independent testing at a private crime lab to confirm the results.

This one got caught stealing by someone outside the crime lab. What are the other ones doing?
Posted by Leslie Sammis

he was not "caught". circumstantial evidence points the finger at him but as we all know, this does not prove guilt. What happened to innocent until proven guilty beyond a reasonable doubt by a jury of his peers. fdle has egg on their face and they intend to see that someone pays for their embarrassment.

Human integrity plays a role for everyone under the spotlight here. I just wonder why an innocent person would resign. If I was truly innocent I would have to be fired from my job. You might say that he had to resign due to harassment, yadda yadda yadda, but even that would allow for an innocent person to sue the harassers. "Good" people do bad things all the time and some get caught while others escape scott free. The sick part is that they don't have the integrity to own up to their mistakes, nor do the people who know the individual want to believe that they could do something so illegal.