Recent Statistics on Civil Violation Citations for Marijuana in Tampa 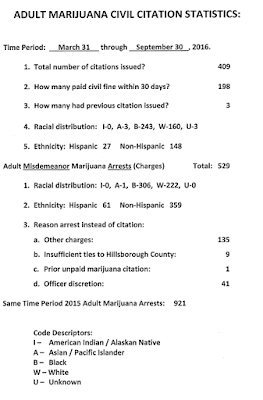 The problem is that officers with Tampa Police Department are not issuing the citations in all cases.

Our last blog article explains why TPD officers are still taking people to jail. In many of these cases, TPD officers are seizing vehicle so they can collect the $500 civil penalty (with an additional $450 being paid for towing and storage).

Read more about how marijuana citations are issued under Tampa Code Section 14-62.

In fact, TPD is issuing the citations less than half of the time in these cases. The other half of the time, TPD is still arresting people for a criminal charge under state law. During the last six month period, 409 citations were issued but 529 people were arrested for marijuana.

I recently obtained a report filed by TPD at the request of the Tampa City Council to address the effectiveness of the program during a six-month period from March 31, 2016, through September 30, 2016. That report provided these statistics: